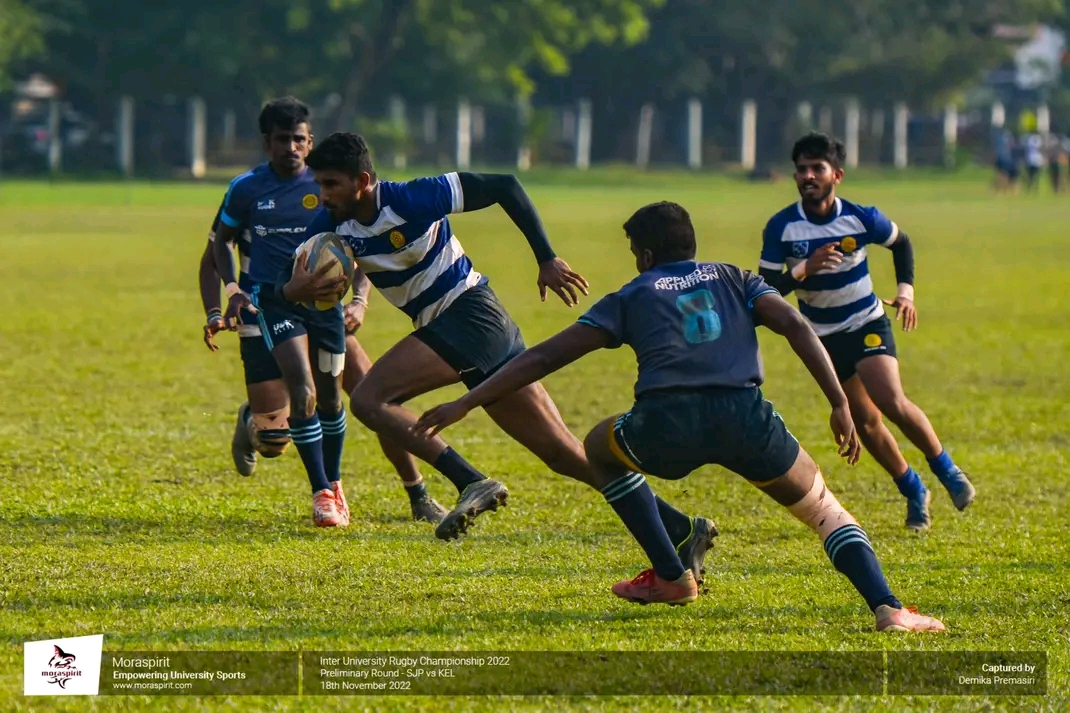 Several weeks of high intense rugby came to a head at the Police Park grounds on the 16th of December as the top 4 teams of the Inter University Rugby Championship would battle it out for one final time, this time for all the marbles. In a unique twist of fate both the finalists and third place playoff teams had faced each other before in the group stages and it remained to be seen whether it would be more of the same or a tale of redemption.

First, in the appetizer before the main course it was the University of Moratuwa and the Sabaragamuwa University of Sri Lanka who locked horns. In the group stage match between the two teams it was Sabra who had come out on top with a 17-10 victory. The opening stages started out cagy as both teams failed to gain a foothold in the game as both teams exchanged penalties. It took a moment of magic from Sabra to break the deadlock as some fancy footwork tore through the heart of the Mora defence to lead to a Sabra try. The next try also came the way of Sabra, this time from a Mora mistake as they lost possession leaving a Sabra attacker clear and free to run all the way to the try line.

With that brace of tries Sabra would enter time leading 15-3 and there would be no letting up in the second half as they would continue to dominate the proceedings racking up a further 3 tries to take the scoreline to a convincing 32-3 before a late consolation try by Mora would drag things back a bit with the final scoreline reading 32-10 with a historic third place in the bag for the Sabaragamuwa University of Sri Lanka.

The first match of the day had seen a repeat of the group stage result and the University of Sri Jayawardenapura was certainly hoping that would once again prove to be the case having won their first round encounter against the University of Kelaniya. Kelaniya themselves were willing for a changing of the tides and their electric first half performance showed off all of the skills they had displayed throughout the competition.

Time and time again Kelaniya would tear through the Japura defence in the first half, stitching together slick attacking movement and racking up try after try to go into half time with a commanding 28-5 lead with Japura only having a solitary try to show for all their first half efforts.

However, the game would prove to be the classic case of a game of two halves, as the University of Sri Jayawardenapura would spend what seemed to be the virtual second half camped inside the University of Kelaniya territory in a ferocious attempt to fight back. Time and time again it seemed only a matter of time when Japura would score but they would be denied again and again, sometimes by heroic last ditch defending and sometimes by mishandled balls and misplaced passes when the try line seemed in sight.

Finally, Japura would make use of their superior second half strength to drive for the line, scoring a brace of tries in quick succession to bring the score back to 28-19 as a glimmer of hope ran through the partisan Japura crowd. However, it would prove to be too little too late as the whistle would soon blow and the small if passionate Kelaniya faithful could celebrate in full voice as their team created history with a first championship in more than 3 decades.

The University of Kelaniya were indeed defending champions, defeating traditional university rugby powerhouses in the University of Peradeniya and University of Moratuwa in the semifinals and finals respectively before avenging their first round loss in style to take home a long overdue title.